It's been a while since I've updated CAGS. This is an initial post and may be modified to better fit with CAGS 2 later.

Revision: Schema updated to 3.2.  See the previous 3.X schema(s) at the end of this post.

This schema builds on the 2.0 and 3.0 schemas in a few fundamental ways:
Limitations

The following image provides an example based on an incident from the VERIS Community Database (VCDB), specifically case a2ed36db-0c78-4162-b2cc-dbaa2ca73866. (Note that the example leaves out the majority of the properties for brevity.)

At its core, the schema is incredibly simple as can be seen below: 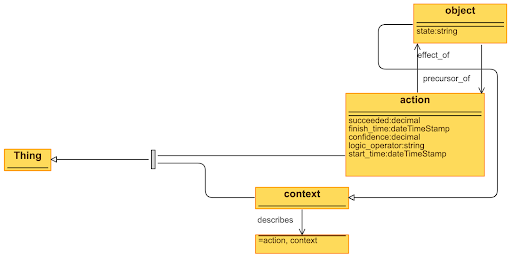 This OWL file can be found here.  CAGS graphs conforming to this format should be stored as triples in JSON-LD format.  If converting to a property graph, the graph should be stored in JSON Graph Format (JGF).

Log data comes in as atomic events.  Given any single event, timestamps only reveal that later events cannot be the parent and earlier events cannot be the child, but the timestamp does not explain _what_ the parent(s) or child/children of an event are.
The graph schema should assist in determining the parent(s) and child/children of an event, (for example by defining that an event occurred due to a file, a credential, or another system and, as such, that object(s) or actions ending in that object(s) must contain the parent.

It is often helpful when communicating a plurality of actions to communicate the relationships between those actions.  This really will touch on multiple use-cases, but is centered around motifs as bounded portion of a path or subgraph.

A system can be documented using the graph schema to identify the interconnectivity between components and highlight potential paths of attack.  (Note, while many of the prior use cases are based around events (or signal generated from the system, this is based on the _actual_ state of the system and actual actions rather than the events they generate.)

An attack surface generated using the graph schema can be used to plan potential attacks on the system.  This can be used for automated attack simulation such as cauldera, planning manual penetration testing (such as bloodhound), etc.  This likely results in an attack graph, (a plurality of actions to take).

Event data should be able to be aggregated into paths and graphs.  This data can then be aggregated across data sources (different tools, sites, organizations, etc) and then queried using graph queries to identify commonalities such as common motifs.

After an incident has occurred,  the incident responders can document the relationship between the observed actions (or events generated by those actions) using the graph schema.

A defender wants to define a detection that contains multiple atomic events and how they are related (such as in grapl).  To do this they need both a motif of the detection and the ability to aggregate events to see if they match the motif.

A defender may wish to simulate attacks containing more than a single event.  To do so they need a motif of events and their relationships and the ability to turn that into atomic actions to take/attempt to take.

After aggregating events, the data can be analyzed using graph tools, neural networks, or other tools to identify things like missing edges (actions the attackers might have taken but where no event exists to document it), nodes (objects that may be involved in the incident, but are currently not included in the investigation), or clustering (to identify assets currently part of the investigation but are unlikely to have been involved).

Given analysis of an attack surface producing an attack graph, the attack graph can then be analyzed to determine thing such as what events will be generated if exercised, nodes and edges central to the attack that might serve as optimal mitigation points, etc.

Given an attack surface, analyze the graph to identify the overall 'risk' associated with it.  The goal is to provide quantitative feedback on the likelihood and potentially impact of cyber threats given threat intelligence.

The 3.1 schema is the same as the 3.2 schema except for the following changes:

The attack flows are defined with nodes as objects and their individual actions as hyperedges. Nodes maintain their individuals state with respect to security while edges document how state is changed by the edge. Edges also contain the logic to adjudicate complex interactions between inputs.  The attack flow (or graph) in its entirety represents the state of the system (or portion of the system) being described.

Nodes have a ‘state’ property representing their current state with respect to the actor.  They indicate the  states (confidentiality/integrity/availability, Create/Read/Update/Delete, or object-specific).
EDGES:
Edges are hyperedges (or, alternately, a bipartite representation of hyper-edges) with with a ‘logic’ property defining the process for translating the inputs into a success at the output.  Another option is to model the edge as a dendrite to represent the input to output logic of the edge.
Edges have a ‘action’ property defining the details of the action. (These may be in ATT&CK, veris, or any an arbitrary language.)
Edges may have a timestamp property to indicate the order in which they occur.  In practice this can be ‘played’ on the graph to update the node states over time.

Thank you for sharing useful information with us. please keep sharing like this. And if you are searching a unique and Top University in India, Colleges discovery platform, which connects students or working professionals with Universities/colleges, at the same time offering information about colleges, courses, entrance exam details, admission notifications, scholarships, and all related topics. Please visit below links:Tilak Maharashtra Vidyapeeth in PuneSurendranagar University in AhmedabadBarkatullah University in BhopalMadhyanchal Professional University in BhopalLok Jagruti Kendra in Ahmedabad<br